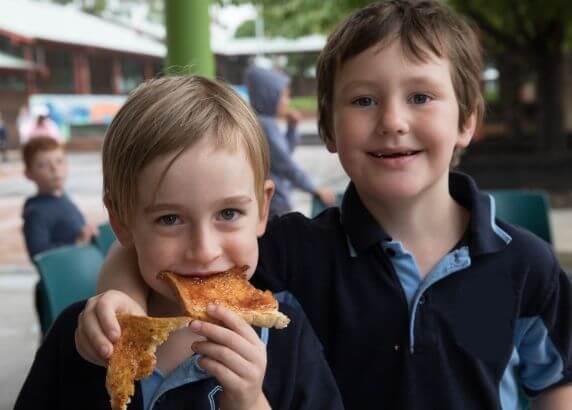 18 June 2019 – The NSW Government announced today a commitment of $8 million over 4 years which will allow Foodbank NSW & ACT (FBNA) to expand the School Breakfast 4 Health program to an additional 500 schools in NSW.

The additional funding will deliver more than 4 million wholesome, nutritious breakfasts to children over the next 4 years, ensuring that kids are starting their day off right.

The School Breakfast 4 Health program currently operates in just over 140 schools in NSW, with schools reporting its contribution towards increased school attendance, student attentiveness and improved behaviour in the classroom.

FBNA CEO, Gerry Andersen, says: “We want children to focus on being kids and learning while they are at school, however the reality is that it’s more likely for a child in Australia (22%) to experience food insecurity than an adult (15%).

“With these additional funds we will be able to reach an even greater number of children and provide them with a nutritious and healthy breakfast.”

According to the 2018 Foodbank Rumbling Tummies Report, parents living in food insecure households say their children will go to school without eating breakfast at least once a week.

FBNA Chief Operating Officer, John Robertson, says: “The evidence from other states that run similar programs demonstrates not only improved educational outcomes but also improved health for young people in the longer term.”

“Given one of the Premier’s goals is to improve child eating habits and health, the Government’s support of our School Breakfast 4 Health program is a significant step towards achieving that goal”.

The incidence of food insecurity is growing and there is unmet and growing demand for food relief with more than 20% of the population (over 4 million Aussies) experiencing food insecurity in the last 12 months.

FBNA is the largest food relief organisation in the state, underpinned by a simple mission to fight hunger by providing quality food to people in need.