Foodbank in Australia is a federated organisation. The Foodbanks in each State and Territory are separate organisations, established independently by individuals or organisations. Each Foodbank has it’s own CEO and reports to its own Board of Directors. 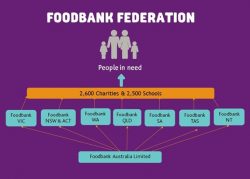 In 1996, the State Foodbanks that existed at the time (Qld, NSW, Vic and WA) decided that it would be advantageous to have a national organisation to speak with one voice to the Federal Government and National Food Donors.  Foodbank Australia was born and since then Foodbanks have been established in SA, TAS and NT all joining the Foodbank Federation.

Together with Foodbank Australia, the State and Territory Foodbanks work cohesively to ensure food and grocery relief is efficiently sourced and distributed to our nation-wide network of 2,600 charity agencies and 2,500 School Breakfast Programs.