Ashley had to quickly find a way to feed
her four children.

A year marred by personal anguish, housing insecurity and the pandemic left Ashley and her four kids eating below the poverty line.

Supporting four kids, aged 8, 7, 5 and 2, has always been tough, but Ashley, 28, has managed to scrape by. Then last year, the young mum from Warwick faced a series of major challenges that turned her life upside down.

Sadly, Ashley’s relationship with her partner had broken down. He continued to live in the house but would not contribute, so Ashley had to cover food and bills for the family alone. Then the pandemic hit, and jobs dried up in Warwick. There was little chance of finding work. In a final blow, the house Ashley rented was sold and she had to move out – but there were no other homes in her budget.

“I’m a strong person and it takes a lot for me to get upset, but here I was trying to cover all food, bills, fuel and school costs on my own, with four kids under eight. There were times I’d have to borrow meat, milk or bread off people I knew, just to get us through. It was really hard.” – Ashley

To ensure her kids were fed, Ashley would do a careful fortnightly shop to stretch her money as far as she could. She knew healthy foods like fruit and vegetables were critical for her kids’ wellbeing, but with her changing circumstances, many staples were now out of reach. Things were so bad that Ashley’s two eldest kids would sometimes go to school with just an apple to eat. Ashley herself was meant to follow a special diet to manage Crohn’s disease, but she could not even afford the most basic of meals.

“Some nights, if there wasn’t enough dinner I would go without or have a sandwich after the kids went to bed.” – Ashley

Then one day, just before Christmas, things reached a new low. After paying her bills, Ashley discovered she had only $100 left to feed her family for the next two weeks. 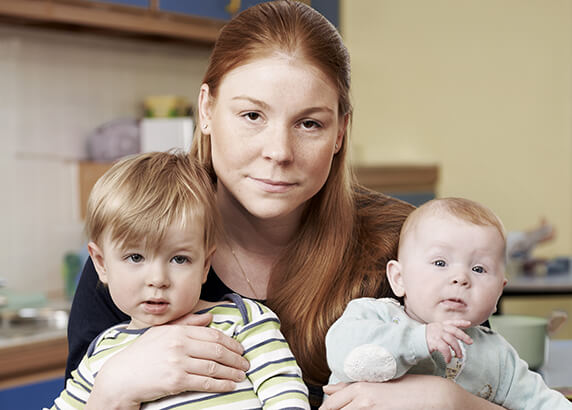 In desperation, she went straight to her local church to ask for help. Thanks to generous people like you and Foodbank’s Member Charities, Ashley could be offered a Foodbank hamper in her crisis.

With so much going on, Ashley is overjoyed to know that in weeks when money is scarce, a Foodbank hamper can fill four young bellies. In it, she can find the staples to make a nutritious and filling spaghetti bolognaise, or a stir fry that she and all the kids enjoy.

“Right now, I am doing everything on my own and it’s hard to ask for help. When I did ask, Foodbank helped in a big way. Without that help, I’d still have to ask people I know to borrow food, so this has made a big difference – thank you.” – Ashley

Many regional towns like Warwick are still reeling from the economic effects of the pandemic, including joblessness and housing instability. For those families already eating close to the poverty line like Ashley’s, your support has never been more vital.

Your generosity will help families like Ashley’s receive the essential groceries they need to get back on their feet. Thank you for making a difference.

Every $1 you donate will provide two nutritious meals to someone facing hunger like Ashley.