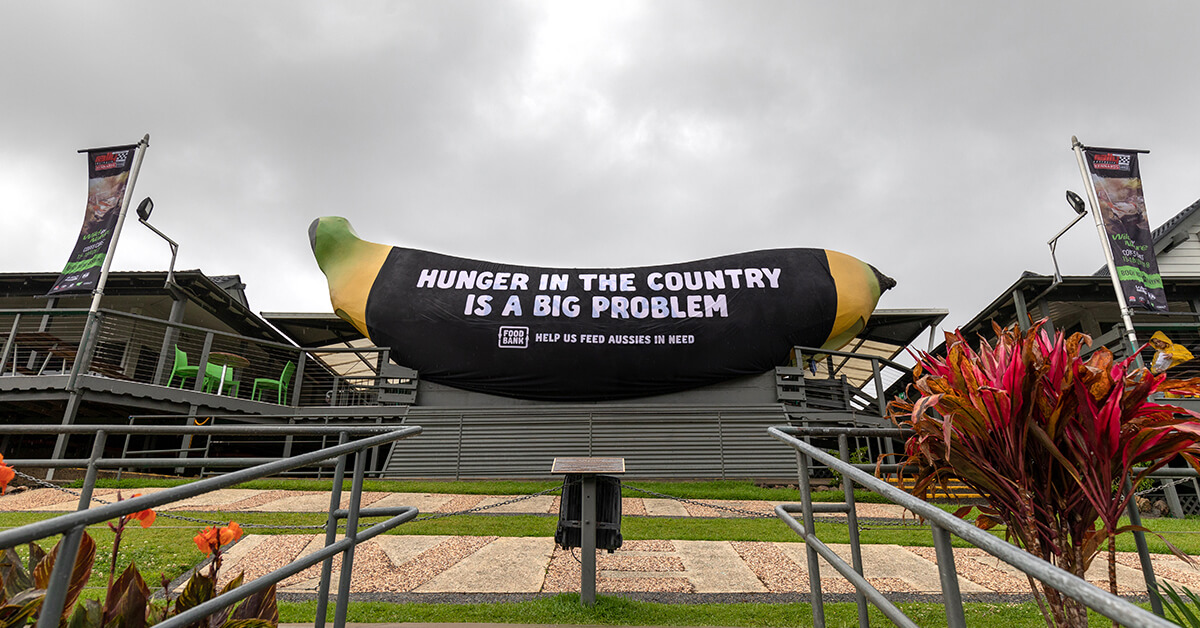 Hunger in the country is a big problem

Sunday 14 October: Today the iconic Big Banana on Australia’s east coast will be shrouded in black in a bold act aimed at drawing attention to our country’s big hunger problem.

Foodbank is taking this extraordinary step to mark the release of its annual Foodbank Hunger Report which reveals that more and more everyday Australians, particularly in rural and regional areas, are going hungry.

“Our country loves its big food icons – the Big Pineapple, the Big Prawn, the Big Lobster, but we have a big food problem that needs to be addressed – hunger in the country,” Foodbank Australia CEO, Brianna Casey, said today.  “Our Foodbank Hunger Report 2018 confirms that 1.5 million Australians in regional and remote areas have experienced food insecurity in the past 12 months, which makes country dwellers a third (33%) more likely to be hungry than their city counterparts. This is even before the full effects of the current drought are factored in.”

The report exposes that, overall, 4 million Australians (18% of the population) have experienced some form of food insecurity in the past 12 months with 76% of these regularly eating less than they need because they lack the money or resources to obtain food.

Foodbank Australia CEO, Brianna Casey, says despite Foodbank providing food for 710,000 Australians every month, it is struggling to meet the demand.

“Half of all our charity agencies report an increase in the number of people seeking much needed food assistance, and only 36% of charities say they are meeting the full needs of the people they assist.

“Food insecurity is a growing problem which is affecting everyday Australians both in the cities and in the bush. We are doing our very best to address this problem, but we need support from our government and our community to help these vulnerable Aussies in need.”

The public can help Foodbank tackle this big problem by joining the growing movement on social media using the hashtags #BigProblem and #ZeroHunger, donating at foodbank.org.au or asking their local Federal Member of Parliament what they are doing to address food insecurity in Australia.